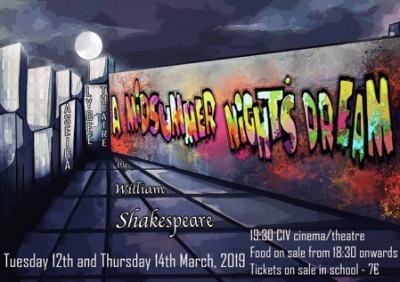 The ASEICA lycée theatre production, A Midsummer Night’s Dream by William Shakespeare, was performed on the 12th and 14th of March 2019. In addition to these two evening performances, 5ème students from the different collèges attended the dress rehearsal and there was a performance to all 2nde students on the Tuesday afternoon as well. I chose to produce this play this year because, besides being a text all our students study in 5ème, it is a fun, fast paced story of LOVE, CONFUSION and MAGIC. It also has quite a large cast of 21 characters: there are the Athenians, four young lovers, the mechanicals (a group of workers rehearsing a play) and the fairy world, reigned over by the King and Queen of the fairies. Rehearsals took place every Wednesday afternoon and some Saturdays.

The actors, all from our lycée, played their roles magnificently, speaking Shakespeare’s language fluently with understanding and conviction. The group also worked hard on mastering the comedy and creating exciting, quirky characters.There was great music by Ms Syran who modernized Mendelssohn's melodies and created additional songs using Shakespeare’s original text for the different character groups. The fairy group had a punk/rock feel, the mechanicals a hippie feel; this was also reflected in their costumes and make up. Mr Duffy and his tech crew created and constructed a fabulous set; Athens was reflected as a white world of order with neon blue lights and the ‘magic forest’ was reinterpreted as an urban jungle, of graffiti, platforms on different levels with ladders, old tyres and oil drums.

The tech students worked hard to create some wonderful visual effects with fluorescent paint and UV light.The show demanded energetic performances from all the actors and culminated in a chaotic rave scene with singing and dancing, for our finale.The play appealed to audiences of all ages, who were all very complimentary and enthusiastic about the talent of our young performers and this dynamic production.

Well done to all involved!

Rate this item
(0 votes)
More in this category: « A Cross-Phase Writing Project Poetry Contest... and the winner is... »
back to top