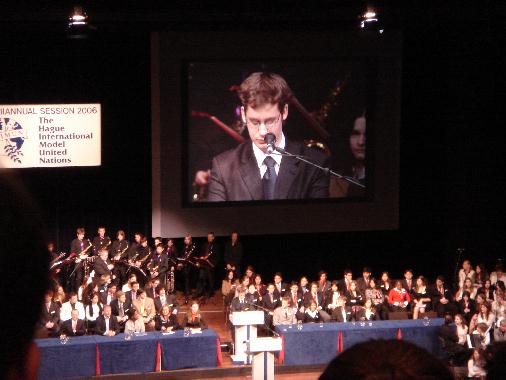 In 1969, Mr. Paul Sand from the American School of The Hague organised the first Model United Nations in The Hague with a participation of around 300 students. In 1981 the THIMUN Foundation was established which today organises the annual sessions of the THIMUN conference and the annual Youth Assembly.

The THIMUN conference now attracts around 3,800 students and teachers from more than 200 schools located in countries as far apart as Iceland and New Zealand, Peru and Russia. The students themselves originate from over 90 different countries. Although the majority of participating schools are English-language-medium schools, a large number of participants attend schools where languages other than English are the medium of instruction. For students from such schools, the THIMUN conference offers an excellent opportunity to expand, develop and put into practice their English language skills, on an informal as well as on a formal level. All the associated activities such as preparing resolutions, lobbying and debating are carried out in English and a high standard is demanded in the formulation of ideas, whether in the writing of resolutions or in arguing and debating with fellow students.

MUN at the CIV

MUN in C.I.V. attempts to recreate THIMUN, and train students to be able to speak clearly to an audience, present their own views and argument and learn about the world at the same time. They are soon prepared to participate in THIMUN. Basically it is a debate club on current affairs, current global affairs. Students pick a delegation, a country on the country list, then learn about that country's policy. At this stage, a student will create a Resolution attempting to resolve a form of conflict or problem globally affecting the world today. A delegate will then present their resolution and propose their ideas to the house, and each delegation will debate these ideas, from the perspective of the country they have chosen to represent.